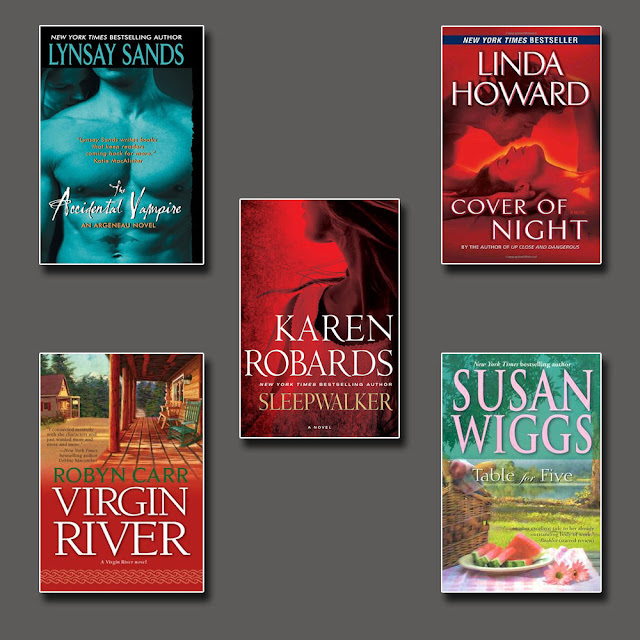 Cover of Night by Linda Howard
In this New York Times bestseller from the author of Killing Time, a young widow who owns a bed-and-breakfast joins forces with a mysterious handyman to seek help from a neighboring town, after their small Idaho village is taken over by brutal thugs.

Table for Five by Susan Wiggs

Before an estranged couple is killed in an unthinkable tragedy, they designate two guardians for their children--a man and a woman who are essentially strangers and who have nothing in common except their compassion for the couple's three orphaned children. Thrown into this strange semblance of family, Sean McGuire and Lily Robinson work together to establish some kind of normalcy for the grief-stricken children--and in the process discover the possibilities that make everything seem worthwhile

"Wanted: Midwife/nurse practitioner in Virgin River, population six hundred. Make a difference against the backdrop of towering California redwoods and crystal-clear rivers. Rent-free cabin included." When the recently widowed Melinda Monroe sees this ad she quickly decides that the remote mountain town of Virgin River might be the perfect place to escape her heartache, and to re-energize the nursing career she loves. But her high hopes are dashed within an hour of arriving: the cabin is a dump, the roads are treacherous and the local doctor wants nothing to do with her. Realizing she's made a huge mistake, Mel decides to leave town the following morning.
But a tiny baby, abandoned on a front porch, changes her plans...and a former marine cements them into place.
Melinda Monroe may have come to Virgin River looking for escape, but instead she finds her home.

The Accidental Vampire by Lynsay Sands

Ever since an accident turned her into a knockout vamp, Elvi Black's been catching her z's in a coffin, staying out of the sun, and giving up garlic. She knows there's more to being undead than what she saw in Dracula, but she can't very well ask her mortal friends about proper biting etiquette. But when her neighbors placed a personal ad for her in the local paper, she never imagined she'd meet Victor Argeneau, a vampire who could have his pick of any woman - dead or alive.

Rich, powerful, and drop—dead gorgeous, Victor's the perfect man for a novice neck—biter like Elvi. He's willing to teach her everything he knows, but he'll have to do it fast. Someone's out to put a stake through her new vamp life, and only Victor can keep her safe - and satisfied - for all eternity.

It’s not that Micayla Lange is afraid of the clinking she hears coming from the first floor of the empty McMansion she’s housesitting for her uncle Nicco. She’s a cop, after all. It’s just that finding out her boyfriend was cheating on her was enough drama for one night. Now she’s alone on New Year’s Eve, wearing flannel pajamas and wielding a Glock 22 as she zeroes in on the unmistakable source of the sound: Uncle Nicco’s private office.

Jason Davis steals things for a living, so unexpected developments are a natural part of the job. Getting caught red-handed by a hot, pigtail-sporting police officer in what is supposed to be a gangster’s deserted house is just one more twist in the game. Kind of like finding incriminating photos in Nicco Marino’s safe, only to discover the cop—and the security cameras—have gotten a real good look at his face.